I used to live in Soho – London back in my later teens. I was a real party goer then. I never exercised and never gave a second thought to Veganism, and I never thought about organic or ethical purchasing.

This was my first time travelling back to London as a Vegan and I must say that I was extremely surprised!

I was down in London visiting with an old friend who I had began to miss dearly and hadn’t seen him in a few years. I was so happy to find he was extremely excited to experience a bit of London Vegan style.

When I arrived into London Euston I was really hungry and we went into Planet Organic on Essex Road. My first reaction was how bustling it was there were loads of people in there all with baskets buying their delicious healthy and ethical goods. It was so awesome to see! I bought some items to make a nice big chunky salad when we got back to his and some milk. He was extremely keen to try almond and soya milk and so he decided he’d buy, almond milk, almond vanilla, soya milk, cashew milk and brown rice milk.

When we got to his place he made us a coffee each with the milk, and he was extremely impressed with it’s ability to make a nice roasted coffee really deep and nutty in taste… needless to say I know he will be buying a lot more of this stuff in future.

After relaxing a while we went to Angel Vue cinema to watch The Divergent Series – Insurgent. After this we went on to The Gate Vegetarian and Vegan restaurant. Our booking was for 9pm and we arrived five minutes early and shown right to our seats. The Gate was vibrant and lively with lots of smiling going on and friendly faces. My friend said how loud it was with lots of happy people enjoying themselves. This added to the great atmosphere.

We started with drinks, and a basket of bread with oil and vinegar and a bowl of olives. As usual you can’t go wrong with the bread in oil and vinegar. Mmmmmm yummy yum yum! The olives were nice too. The green ones were a little hard for my normal liking but the brown olives were very succulent. I asked my friend many many questions, getting him to update me on all I have missed in his life and how everything was going for him while occasionally nibbling away at our bread and trying to poke the slippery olives with the toothpicks. (you know how it goes!).

For starters I had Grilled Chipotle King ‘Prawn’ Served on a red quinoa salad, avocado, tomatillo and green chilli salsa finished with lime and kale crisps. This was really tasty and I’d highly recommend it to others. The ‘prawn’s flavorful, tender, juicy and chewy! My friend got Potato chat – New potatoes with crispy spinach, mint and tamarind chutney. His face lit up when he tried this. In fact he liked it that much that when I offered him to try some of mine he said “no thanks I don’t want to spoil how much I’m enjoying this one in case yours ins’t as nice!”.

Once again we nattered a while before our mains arrived. We both decided on the same thing for mains and ordered the Thai red curry. Aubergine, fried tofu, baby corn, mange tout and mushrooms in thai spiced creamy coconut sauce served with aromatic wild jasmine rice and pineapple and chili salsa. My friend liked the tofu but wasn’t massive on it but said, and I agree, what made that dish so delicious was the shitake mushrooms in the sauce. I agreed with him 100% those mushrooms were DELICIOSO! If yu are unsure about this choice my friend stays in Thailand a lot through the year and gets a lot of Thai curries so it must have been pretty good.

The staff the entire time were very courteous. They weren’t pushy and allowed you time to relax, talk and order when you wanted. I hate it when you feel your being pushed out the door. Eating out is one of my favorite past times and I love deep convo over dinner and a few drinks there after. You can’t do that in clubs! and seemed to know exactly what they were doing. This restaurant has been going for 25 years now and we were interested in the building itself. An interesting piece of architecture with mosaic tiling on one wall and a circular sun roof on an indoor terrace. Just behind the bar is a very wide wall that comes out slightly and it looks like once there would have been a grand fire place there. The waiter told us that the building is very old and has had many renovations and extensions over time. He believed it used to be a school for some time and then for many years it’s always been used for selling food, ie restaurants.

We paid the bill and then off we went full, content, smiling and time to unwind at his place. Once we got there I made us some non alcoholic champagne with coconut water, sparkling water and fresh squeezed lime. Then we chatted for a few hours before separating for the evening into our rooms.

On Sunday I woke up at 7:30am refreshed and ready to go for a run. I had already planned a 7.5 mile where I would go from his place near Old St Station north up to Regen’ts Canal and then Eastward right up to Victoria park. I ran the whole perimeter of the park. It’s much bigger than you might think. You could easily get a decent normal training session just doing one circle of the park and nothing else. I was in my Salomon Speedcross 3s. Some people say they have problems with these on roads and they are for trails only but I haven’t had any issues on roads with them. Though at the park I ran on the dirt track trail circling the whole park 😉 The sun was shining and I remember smiling because it was just so beautiful to be in such a busy part of the world and see so many people getting out early on a Sunday morning, on their own or with friends, running on the canal and the park. It really lifted my spirit. We do all kind of really want the same thing in life… happiness.

After getting back to my friends and changing we took a trip up Columbia Road east London where the flower markets are. DO NOT go down here unless you are willing to move VEEEEEERY slowly, enjoy the plants and flowers and absorb the smells. It was absolutely jam packed with people and very slow to get through. My friend asked if I was ok if it was annoying me. I just told him how beautiful everything was. So colorful and aromatic! Then we came to the end of the street.

Next we headed to the famous Brick Lane which is sprawling with many markets of hand crafted goods and home made foods. We were specifically looking for a place called Tickled Tastebuds, 91 Brick Lane which was supposed to be in the Upmarket. We found this Vegan bakery on Happycow.net and looked forward to buying some savoury pies. After walking around in circles for an hour and half 7 times we gave up looking for it. The website said to check their Twitter for live info as to where they are. We checked and there was no info and they didn’t say they weren’t there. I do believe they didn’t go that day which isn’t good because they never told anyone. I have sent an email to ask them though as I have been known to  have things right under my nose before and not see them.

We decided to move on back to another Brick Lane market where we had seen several vegan stalls earlier. We decided to have some Ethiopian street food and we were not let down! It was absolutely delicious. Now unfortunately I have no idea what it was. The guy in front of us ordered something as we arrived and it looked so amazing we just asked if it was Vegan not veggie and they said “yes it’s Vegan”…. “OK We’ll both have whatever he’s just had”. We then bought a smoothie from another stall to drink with it. 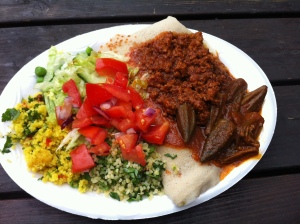 When queuing for the drinks I spotted a girl at a stand waving her hand in the corner of my eyes. When I turned she was looking right in my eyes and smiling and she said “I LOVE your hat”. I was wearing my VEGAN hat 😛 she then pointed to the cookies and sweet treats on her stall “All these are Vegan”. I called across using hand gestures to communicate properly “Thank you 🙂 I’ll be over after this food to come and get a few to try!”. After eating our amazing street food we went back to get some cookies. I got 2 normal cookies, a brownie and a chocolate mint cookie and they were so yummy! I ate 1 on the train home a few hours later and the rest when I got home. The girl was so nice. I asked politely if I may take a picture because I’d like to pop it on my blog and she said it was fine. 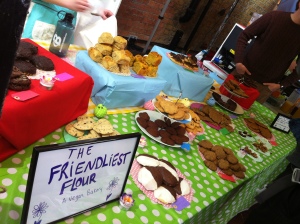 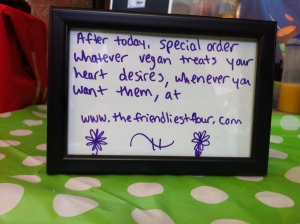 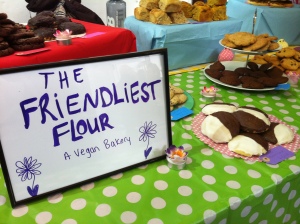 So the end of my trip was approaching. We meandered around some of the streets for a while and stopped off at a Pret A Manger by St Pauls Cathedral for an orange infused latte with soya. This has now become one of my friends top choices for the future. Another point for our dear cows 🙂

Then I got back to Euston and headed home. I put my chillout music on my iphone and relaxed back in my seat. I smiled and I thought what an amazing time I’d had. I really didn’t realise how much there was in London for Vegans. I was highly impressed and I thought about how anyone in England who is Vegan and likes City life seriously ought to be living in London.

I’m looking forward to my next trip where I will be digging out other places for us to go. Until then I’ll cherish all these wonderful memories.

Have you got all day? ;) END_OF_DOCUMENT_TOKEN_TO_BE_REPLACED
This entry was posted on Sunday, March 22nd, 2015 at 20:07 and tagged with happiness, scotty runner, scotty runner hassall, scottyrunner, Travel, vegan food, Vegan London, Vegan Street Food, Victoria Park Running and posted in Uncategorized. You can follow any responses to this entry through the RSS 2.0 feed.
« The Secrets to Success – How Badly do you Want it?
Brief Update »

Anything you want to say about this? Cancel reply